I received a text today which  was surprising. The individual wrote an apology saying they let me down but the reason they let me down is because of the topic I kept bringing to the table. Really? I thought I was putting up with  that individual’s looping. That looping that keeps one stuck in a circular mental processing and challenges meta-cognition.

Individuals, more often than not, use either emotions or logic to dictate behaviors.  Emotions are not necessarily reflective of  the veracity of the situation; yet, they are reality of feeling in that moment. When solely going on emotions, which  are subjective, no regard is given to the reasonable way of understanding. Logic looks at fact without emotive sway keeping things black and white. Logic is objective and void of instinctive or intuitive perspectives. When Emotional thinking is merged with Logic thinking we birth the Wise mind. The Wise mind is the neurological balance of the limbic system (Emotional Mind)  and pre frontal cortex (Reasonable Mind). 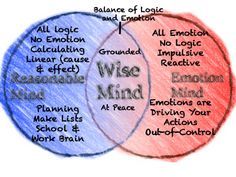 Just a note that for those of us who have experienced trauma, emotions  tend to get stuck in the psychological reaction of fight (Hyperarousal) or flight (Acute stress) response.

What does this have to do with the text? After calming down my limbic system through deep breaths and activating my Wise mind I was able to see from a different perspective. Yes, I had been ruminating on a specific topic; but, they had been engaging in the topic. My awareness is that they were operating with their emotional mind due to personal stressors.

I kindly responded to the text with empathy. I can’t say they recognized the type of emotion they put into play. I can say, that tonight I can go to sleep knowing that I”m not too much. That I am okay. That people go through stuff and often don’t  integrate the emotional and rational mind. I am more cognizant to use the Wise mind especially when I am texting and to always offer compassion because I have not walked not walked in their shoes.